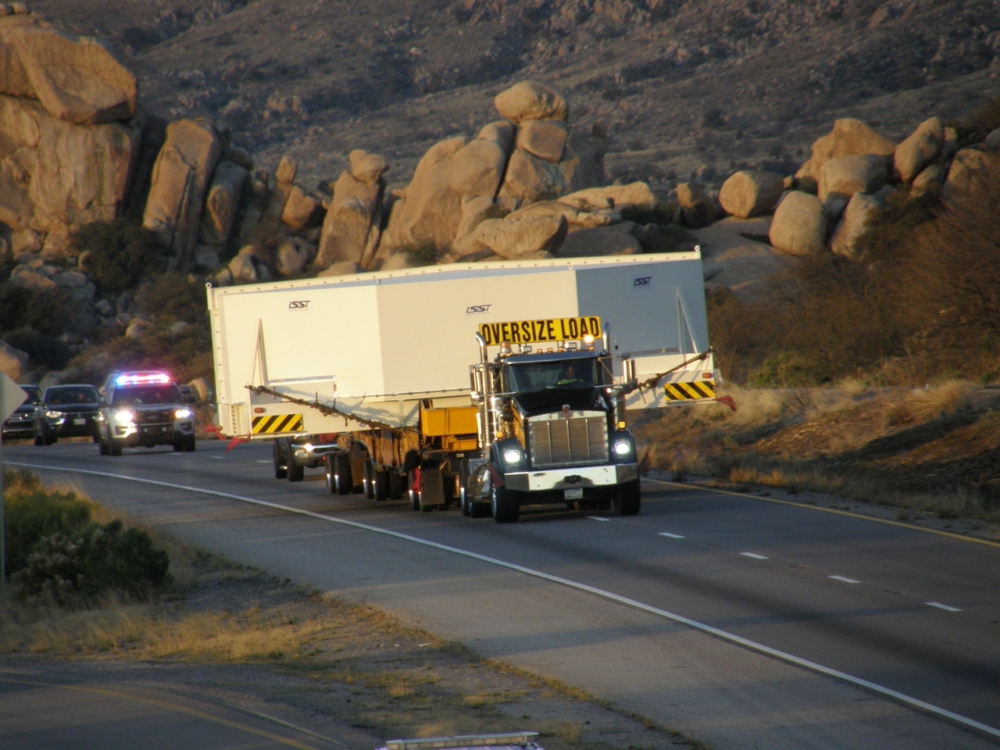 March 26, 2019 - UPDATE: The M1M3 has arrived in Houston and is now waiting for the ship that will take it to Chile. The trip from Tucson to Houston was uneventful for the mirror, but sparked a lot of curiosity from motorists who had to make way for this very oversized load! More photos, provided by transport company Precision Heavy Haul, Inc., are available in the LSST Gallery.

March 15, 2019 - LSST’s biggest mirror, the 8.4-meter Primary/Tertiary Mirror (M1M3), is officially on its way to Chile! Before dawn this morning, the vehicle carrying the mirror in its storage and transport container departed from the Richard F. Caris Mirror Lab in Tucson, AZ. On Tuesday the mirror was loaded into the container using a custom lifting fixture, and on Thursday the container was loaded and secured onto a 108-foot Precision Heavy Haul, Inc. vehicle outside the Mirror Lab in preparation for this morning’s departure. Now, the mirror is on its way to the Port of Houston in Texas, where it will be loaded onto an assigned ship for its five-week ocean voyage to Chile.

The transport vehicle, with its wide and fragile load, will travel slowly on a route designed to minimize traffic disruption. While on a typical road trip it might take two days (driving about eight hours per day) to make the trip from Tucson to Houston, we anticipate that this leg of the journey will take the vehicle carrying the M1M3 approximately 10 days.

Tucker Booth, LSST Telescope and Site Mechanical Engineer, supervised the departure of the M1M3 this morning. As the truck was pulling away from the Mirror Lab, Booth remarked, “A lot of people worked very hard to get to this moment. It’s exciting to have the work in Tucson finished, and to move on to the next phase.”

Photos of the M1M3 being loaded are available in the LSST Gallery.