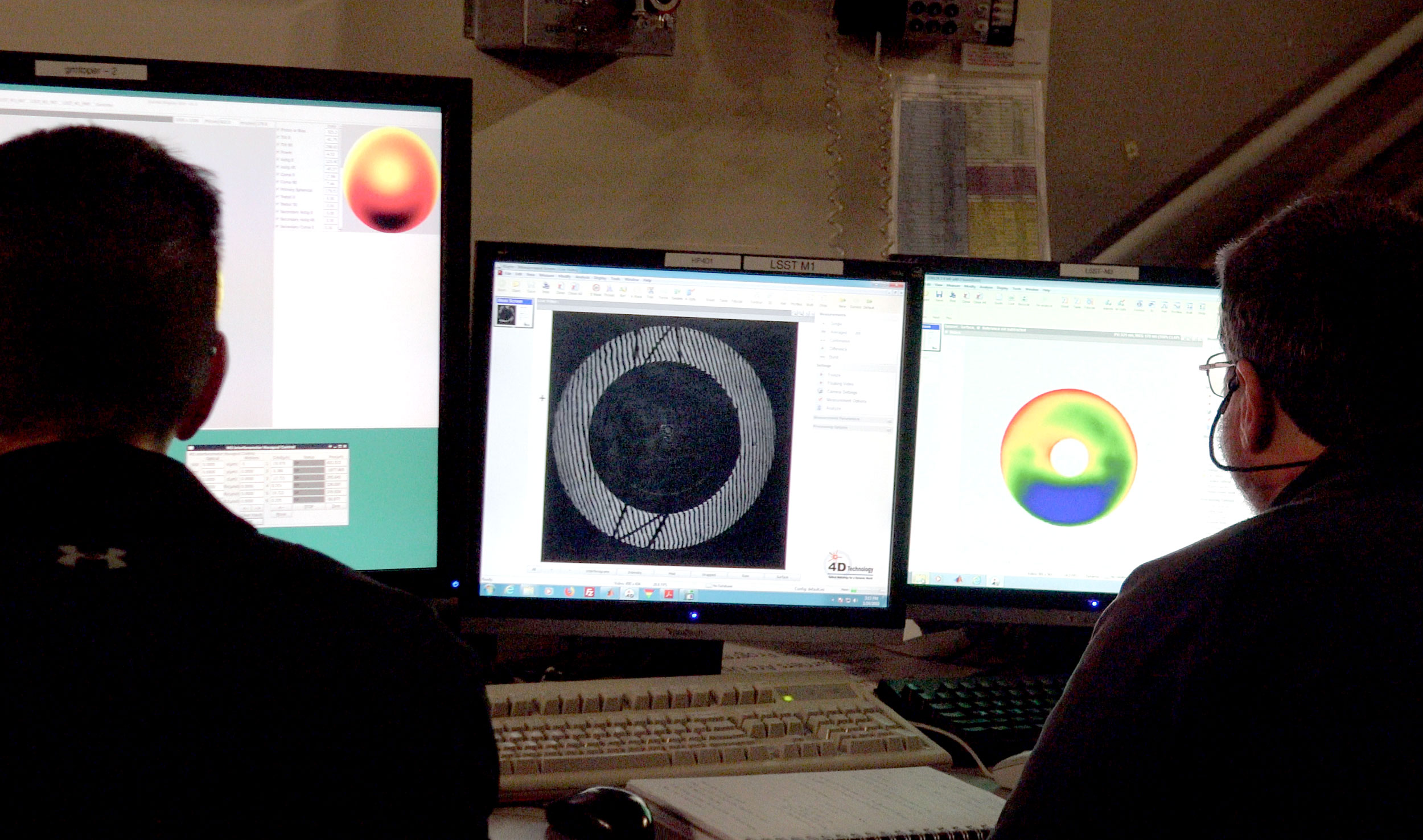 January 28, 2019 - The LSST Primary/Tertiary Mirror (M1M3) is currently in the Richard F Caris Mirror Lab at the University of Arizona for optical testing. In January, the M1M3 on its support system was positioned at the bottom of the lab’s interferometry tower in anticipation of two test campaigns. The first, which has just concluded, took place from January 14-25. The second campaign is scheduled for February 11-22.

The tests use specialized optical equipment to evaluate the figures of the M1 and M3 mirror surfaces. Separate instruments, called interferometers, are used to perform measurements on each of the two mirrors that make up the monolith. The interferometer used to test M1 is at the very top of the tower, and the one used to test M3 is lower down, on a movable bridge. The mirror surfaces are tested separately, first M1, then M3, then M3 again, then M1. When M1 is being tested, the lower interferometer is moved out of the optical path.

During the test process, the interferometer in use emits two beams of light. One travels to the mirror and bounces back, and the other goes to a reference within the interferometer. The interaction between the two beams of light is recorded in an image called an interferogram (the black and white image in the photo to the right). The lines in the image are called interference fringes, and each one represents approximately 300 nanometers. A tight grouping of lines indicates a steep change in the height of the surface, much like tight lines on a topographic map indicate steep terrain. A “perfect” mirror interferogram would be a solid color, because its measurements would be recorded as a single fringe. But according to LSST Telescope and Site Mechanical Engineer Tucker Booth, achieving perfection on individual mirrors isn’t the goal. Instead, it’s the optimization of the entire M1M3 monolith that will ensure the best possible images during LSST Operations.

Allowing adequate time for optical testing, analysis, and optimization in Tucson reduces the work that will have to be done to prepare for operations once the telescope is assembled in Chile. Additionally, the unique testing environment available at the Richard F Caris Mirror Lab isn’t available in the summit facility building, so LSST is fortunate to have access to this world-class facility for the M1M3 optical test campaigns. M1M3 is currently scheduled to ship from the U.S. to Chile in May.