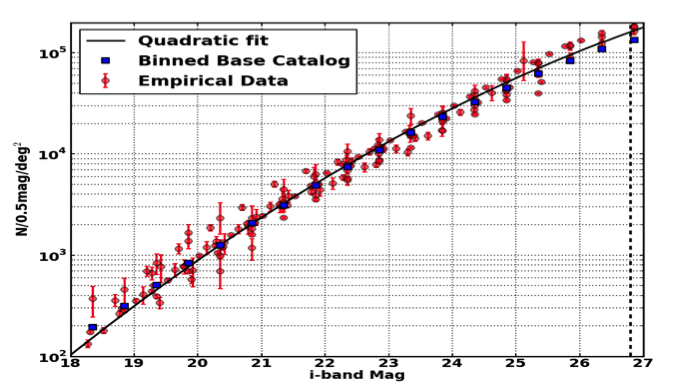 The catalog simulation framework (CatSim) comprises a database of stars, galaxies, and Solar System objects that can be queried as a function of position and survey time. These simulations incorporate variability for a subset of the stellar sources and for the AGN in the galaxy catalog.

We describe here the properties of the initial galaxy database that is stored within the CatSim framework. A more recent galaxy catalog (CosmoDC2) has been constructed as part of the Dark Energy Science Collaboration data challenges. This new cosmological catalog is derived from N-body simulations coupled to the Galacticus semi-analytic model. It covers > 400 deg2 of the sky and reaches a redshift limit of z=3 and a magnitude limit of r=28. Full details of this catalog are available in the following article. We recommend the adoption of this catalog for cosmological tests for LSST simulations. For completeness we describe below the properties of the initial cosmological catalog in CatSim

These initial CatSim galaxy simulation is based on dark matter haloes from the Millennium and a semi-analytic baryon model described in De Lucia et al. The semi-analytic model features radiative cooling, star formation, the dynamics of black holes, supernovae, and AGNs and was adjusted to mimic the luminosity, color, and morphology distributions of low redshift galaxies.  LSST cosmological catalogs were generated from the De Lucia et al. data by constructing a lightcone, covering redshifts 0<z<6 from 58 500 h−1 Mpc simulation snapshots. The final catalog comprises a 4.5x4.5 degree footprint on the sky (sufficient to cover a single LSST field-of-view) and samples halo masses over the range 2.5x109 to 1012 M¤.

Dynamically tiling this footprint across the sky enables the simulation of the full LSST survey area while keeping the underlying data volume small (but at the expense of introducing periodicity in the large scale structure). For all sources, a spectral energy distribution (SED), is fit to the galaxy colors using Bruzual and Charlot spectral synthesis models. The De Lucia et al. catalog includes BVRIK magnitudes and dust values for the disk and bulge components of each galaxy as well as radii, redshift, coordinates, stellar age, masses and metallicities. Fits are undertaken independently for the bulge and disk and include inclination dependent reddening. Morphologies are modeled using two Sersic profiles and a single point source (for the AGN). Bulge-to-disk ratios and disk scale lengths are taken from De Lucia et al. Half-light radii for bulges are derived from the absolute-magnitude vs half-light radius relation given by Gonzalez et al. Colors and stellar mass of the AGN host galaxies are estimated from the AGN luminosities.

Stars are represented as point sources and are drawn from the Galfast model of Juric et al. Galfast generates stars according to density laws derived from fitting SDSS data to a model of a thick and thin disk, and a halo. Each star is assigned a metallicity, proper motion, and parallax. Spectral energy distributions are fit to the predicted colors using the models of Kurucz for main sequence stars and giants, Bergeron et al. for white dwarfs, and a combination of spectral models and SDSS spectra for M, L, and T dwarfs. For Galactic reddening, a value of E(B-V) is assigned to each star using the three-dimensional Galactic model from Amores and Lepine. For consistency with extragalactic observations, this reddening model is re-normalized to match the values in the Schlegel et al. dust maps at a fiducial distance of 100 kpc. 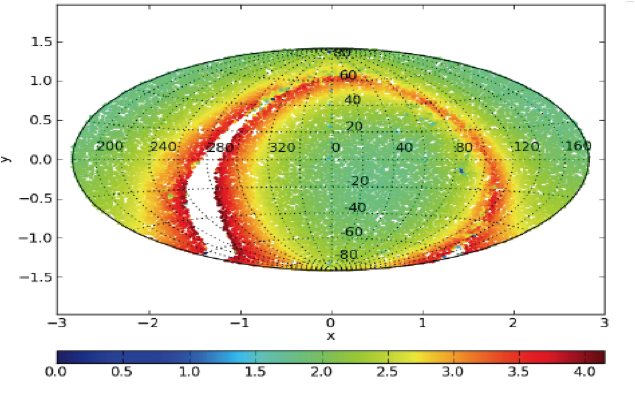 The Solar System model is a realization of the Grav et al. model. All major groups of Solar System bodies are represented including: main belt asteroids, near earth objects, trojans of the major planets, trans-neptunian objects, and comets. There are approximately 11 million objects in the Solar System catalog with the vast majority (about 9 million) being main belt asteroids. Populations are complete down to apparent magnitudes of V=24.5 and each object is assigned a carbonaceous or stony composition spectrum. The choice of a C or S type spectra for an object is based upon a simple relation to the size of its orbit that approximately matches SDSS asteroid observations. The location of the Earth at the time of a particular observation is incorporated through the orbital ephemeris software oorb. 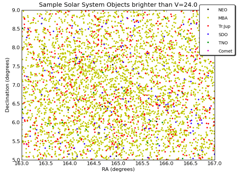 An example of output catalogs from the catalog are available

A more detailed description of Catsim is available

For more details of CatSim or if you have questions, they can be addressed using community.lsst.org.

Fig. 2 - The distribution of stars within the Galaxy model.

Fig. 3 & 4 - The distribution of asteroid populations within catsim and a realization of the positions of these asteroids on the sky.