A simple recipe: Take a lot of mass – a galaxy or cluster of galaxies – and place it in front of a distant object to create a powerful tool for studying cosmology and galaxy structure. This technique, gravitational lensing, provides information not only about the magnified source but also about the foreground lens. Rubin Observatory will contain more strong gravitational lensing events – those where multiple images of the background source form – than any other survey before it, opening up a wealth of possibilities to answer some of the most fundamental questions about the Universe. The survey’s large volume, high accuracy photometry and multi-filter time series will produce some big advances in strong lensing science. 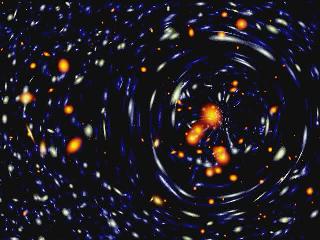 Two simulations of strong lensing by a massive cluster of galaxies. In the first image, all the dark matter is clumped around individual cluster galaxies (orange), causing a particular distortion of the background galaxies (white and blue). In the second image, the same amount of mass is more smoothly distributed over the cluster, causing a very different distortion pattern.

These movies show the evolution of the distortion as the clusters move against the background over half billion years. 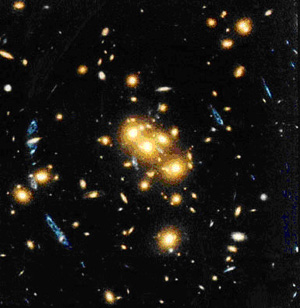 The galaxy cluster CL0024 as seen by the Hubble Space Telescope. The multiple images of a strongly lensed background galaxy are clearly visible.

Dark matter continues to stubbornly resist efforts to pin down its nature. Currently we have no means of capturing or making a dark matter particle, although efforts to do just that are underway at laboratories around the world.

What researchers can do is tease out clues about the mysterious substance by studying how it affects the matter we can observe directly. In the process we've learned a great deal about the large-scale structure of our Universe. Careful observations have shown us a Universe made up of vast filaments of dark matter stretching for hundreds of millions of light years in extent that anchor denser clumps of the stuff, and in those clumps are embedded clusters of galaxies, sometimes thousands of members strong.

Researchers still have many questions. How did these filaments originally form? How is the dark matter distributed amongst the galaxies in a cluster? Is it concentrated within the galaxies, or does it fill the vast spaces between?

One important tool for answering such questions exploits the one characteristic dark matter is known to share with the normal matter that fills our view: it can pull other matter to it gravitationally. That tool is known as strong gravitational lensing, which happens when a concentration of matter in a volume of space bends light waves streaming past it in a process analogous to the way a glass lens refracts light. However, instead of a perfectly formed lens with one precise focal point, such concentration of matter generally produce multiple images of the source. Strong lensing was first seen in a quasar lensed by a single galaxy in 1979, but the huge dark matter concentrations in clusters of galaxies can also function as gravitational lenses. An example is the above image of the galaxy cluster CL0024. The multiple images of the background galaxy are clearly visible as extended blue wisps. 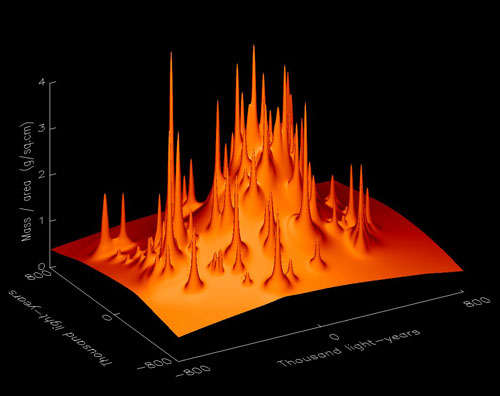 Strong gravitational lenses have another function: as cosmic magnifying glasses, capable of producing clear images of objects that could never be seen otherwise because they are too small, too faint, or both.

The unprecedented combination of depth and area provided by Rubin Observatory will be exploited to find rare alignments, such as clusters that create multiple images of background sources. By determining the gravitational strength at several locations in these systems, Rubin Observatory images will allow accurate, detailed reconstructions of the distribution of matter in the clusters. 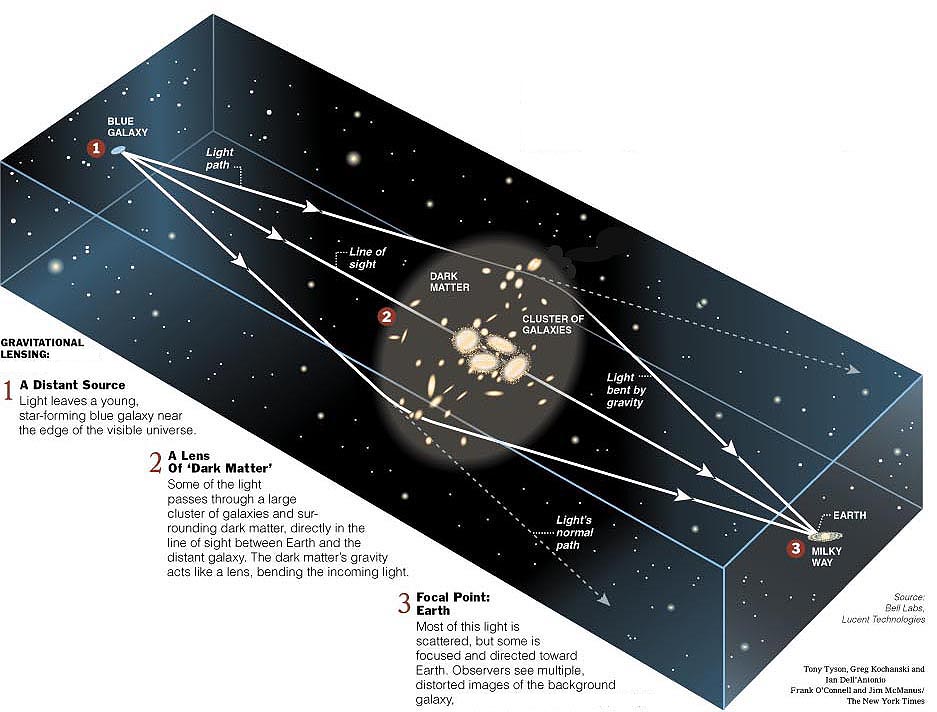 Other lenses will be used to look out, revealing further insights into cosmic structure or giving us a closer look at rare objects. Some examples include lenses that show multiple images of supernovae, instances where light rays have been bent by more than one lens, and unusual strong lenses with complicated mass structures.

In addition to the rarer cluster lenses that will be found in the LSST survey, the survey images will produce at around 100 times more galaxy-scale lenses than is currently known. Our simulations predict that the final data set will contain approximately 20,000 detectable cases of a background galaxy being multiply-imaged by a foreground system; almost half of these will show active galactic nuclei and quasars (galaxies with supermassive black holes at their centers), as flickering points of light. These objects are some of the most distant known, although the precise number depends on viewing conditions. 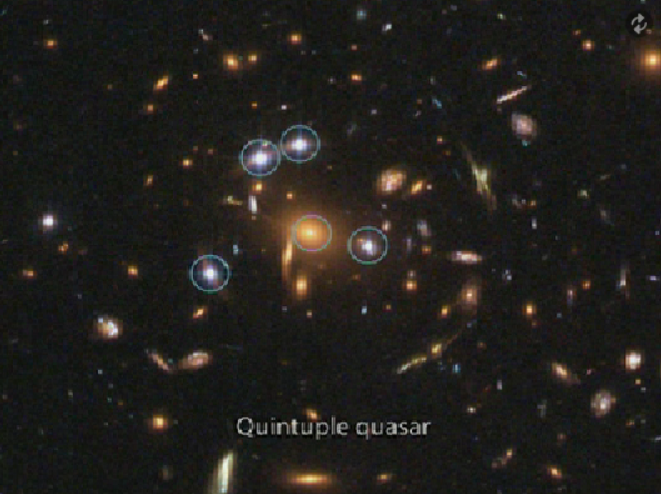 High-precision statistical tests of small-scale and non-symmetrical structure in galaxies and groups can be conducted using massive elliptical galaxies known to exist at a time when the universe was roughly half its current age. Rubin Observatory should be able to find large numbers of these elliptical-galaxy lenses.

The prospect of discovering a significant number of complex gravitational lenses is an exciting one: as an example, the "quintuple quasar" lens system shown here has five lensed images, with the lens model predicting two more. Such multiple image systems will provide much information on lens galaxy structure, while the very high magnifications attainable will provide us with a very powerful "cosmic telescope." The Rubin Observatory optical data on sources observed in this way will provide very important complementary information to that available in similar scale surveys across the rest of the electromagnetic spectrum, such as the Square Kilometer Array in radio waves.