Probing the Nature of Dark Energy 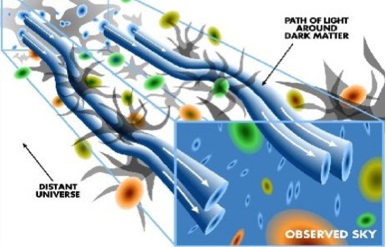 The light from distant galaxies is gravitationally lensed by the cosmic web of dark matter, causing a small change in the ellipticity of the images of galaxies called cosmic shear.

The world of quantum gravity at a fraction of a second after the Big Bang, when the universe was so hot and dense that even protons and neutrons were broken up into a hot soup of quarks, connects to the world as we now see it—a vast expanding cosmos extending out 14 billion light-years. Dark energy and dark matter are relics of the first moments when the unfamiliar physics of quantum gravity ruled.

Dark matter and dark energy still rule the continuing evolution of the Universe. Dark energy is a mysterious force that is accelerating the expansion of the universe. The expansion has slowed the clustering of dark matter, one of the universe's main building blocks. If we could measure the precise history of the Hubble expansion from the Big Bang until now, and chart the development of mass structure in the Universe, we could test theories of the physics of dark energy. Different theories predict different scenarios.

For a universe with a given mass density, how the expansion of the Universe has changed over time gives us information on the amount and nature of dark energy because dark energy affects two things: distances and the growth of concentrations of matter. Measuring how dark matter has accumulated gravitationally in giant structures over the history of the Universe and how the ratios of distances have grown with cosmic time—via Rubin Observatory weak gravitational lensing observations—will provide clues to the nature of dark energy.

A key strength of Rubin Observatory is its ability to image huge volumes of the universe. Billions of distant galaxies will have their shapes and colors measured. Sufficient color data will be obtained for an estimate of the distance to each galaxy. This will enable a unique probe of the physical nature of the dark energy that appears to fill the universe.

If, due to this dark energy, the expansion of the universe has been accelerating, the development of mass structures via ordinary gravitationally-induced accretion will have slowed over time. The rate of that slowing, if found, is sensitive to the physical nature of dark energy itself: the so-called "equation of state," which is the outward pressure it exerts divided by how much of it there is, essentially telling us how much influence dark energy can wield at any one time.

In its deep wide-angle survey Rubin Observatory will be able to pin down the equation of state of dark energy to better than a few percent. Due to its wide coverage of the sky, Rubin Observatory is uniquely capable of detecting any variation in dark energy with direction. In turn, this will tell us something about physics at the earliest moments of the Universe, and how it set the course for cosmic evolution.

How Do You Measure This, Exactly?

Combining many new observations of our universe will lead to precision cosmology. More importantly, the combination holds the promise of testing the entire foundation of the theory. What if different tests of dark energy yield conflicting results? Then we may be onto something even more interesting: a hint that we do not fully understand the nature of space, time, and gravity. Thus, Rubin Observatory will play a key role in probing new physics beyond the standard model.