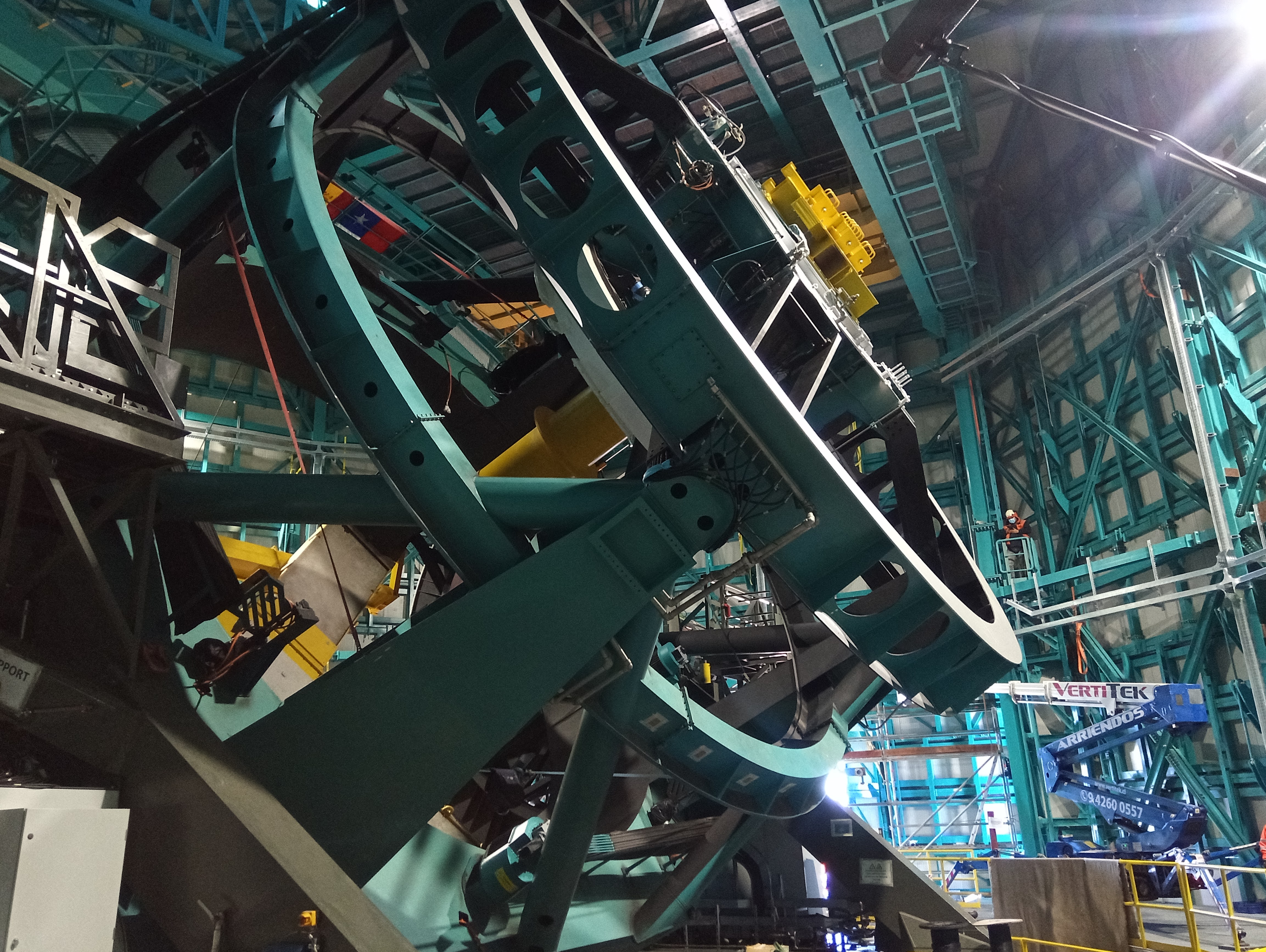 October 5, 2021 - Dynamic things are happening on the summit of Cerro Pachón; the era of static components is ending, and the telescope is on the move! Testing of the hydrostatic bearing system of the Telescope Mount Assembly (TMA) was successfully conducted in mid-September—during this process the TMA was manually rotated in azimuth and elevation for the first time since testing at the Asturfeito factory in Spain.

The TMA left Spain and was shipped to Chile in August 2019. Once all the components of the TMA arrived on Cerro Pachón, the process of installing it in the summit facility began, but then had to be put on hold in March 2020 because of the Covid-19 pandemic. During the ~10 months that construction was either completely halted, or confined to essential activities, the TMA was stored safely inside the dome enclosure (which wasn’t complete yet) under a weatherproof polyurethane tarp and inspected regularly by the small teams who were permitted to visit the summit. Completing the dome enclosure was a critical task that was given priority as soon as the Summit Dome team gained access to the summit; now the finished dome enclosure is complete and provides full protection for the TMA.

As construction activities started to ramp back up in late 2020, the Rubin summit teams focused on the deployment of the utility systems (including power, oil, and coolant) required for the telescope to operate. Once international contractors were able to enter Chile and work on the summit again, things started moving more quickly, and in September 2021 it was time to awaken the TMA from its long sleep.

The hydrostatic bearing system for the TMA is a complex combination of state-of-the-art industrial bearings and a high-pressure hydraulic oil film provided by the summit facility power plant. It allows the ~300-ton telescope structure to lift about 70 microns (the approximate diameter of a human hair) above the pier track rail. The film of oil creates an almost zero-friction interface, which means that the enormous structure can be rotated in azimuth by just a few people using their hands.

During the tests, the TMA was also successfully rotated in elevation, from zenith to horizon. This rotation requires the accurate balance of the surrogate masses standing in for the future optical systems: the Primary/Tertiary Mirror (M1M3), the Secondary Mirror (M2) and the LSST Camera.

As a result of the manual tests, contracted personnel on the summit were able to confirm that the hydrostatic bearing pads were in good shape after the time in storage, and that the hydrostatic bearing system is operating within specifications. From here, the Rubin summit teams will continue work on installing the motors and completing the utility systems; these tasks will keep the teams busy through the end of 2021. Another exciting milestone, installation of the Commissioning Camera at the Top End of the telescope, is scheduled for early 2022.