The TMA Arrives at the Summit

The TMA Arrives at the Summit 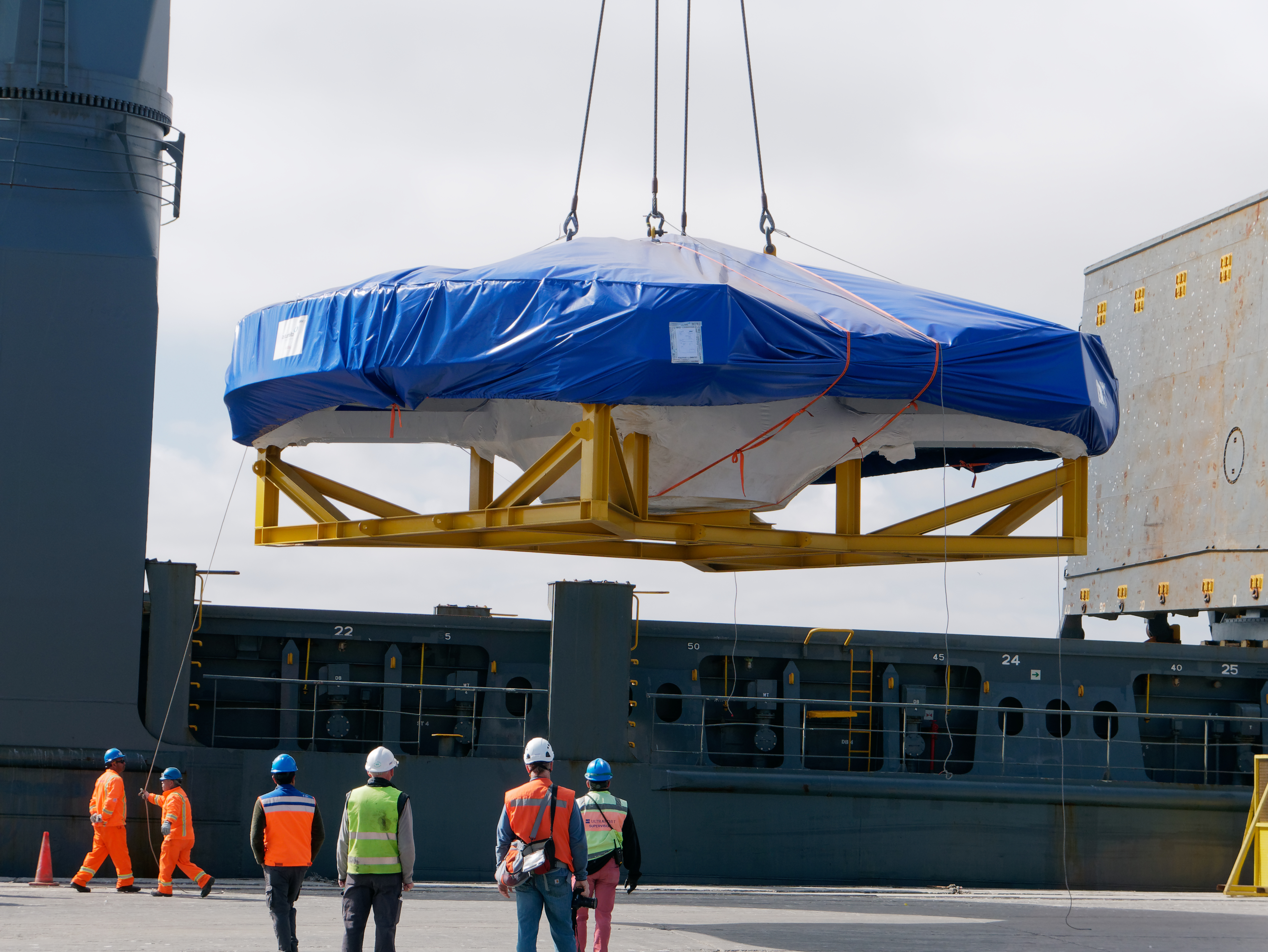 September 24, 2019 - The LSST Telescope Mount Assembly (TMA), which was built in Spain and shipped to Chile in August, 2019, has now successfully reached the summit. The enormous structure was disassembled into 26 pieces for transport, and each piece was wrapped in sturdy vinyl to protect it during shipping. The ship carrying the TMA cargo arrived in Coquimbo on September 7th and unloading began the same day—some pieces were placed on the dock, and a few were loaded directly onto the transport vehicles that would carry them to Cerro Pachón.

The TMA is the structure that will support LSST's mirrors and camera, and this complex assembly also includes the many subsystems necessary for operation of the telescope. It was designed by GHESA Ingeniería y Tecnología, S.A., and constructed by Asturfeito, S.A. over approximately two years. A time-lapse video of the construction project, which condenses the activity into just three minutes and illustrates the size and complexity of the TMA, can be viewed at this link.

Getting the TMA cargo to the summit took a fleet of nine trucks and twelve trailers, operated by transport company Javier Cortes, S.A. Over the span of a week, the vehicles moved the cargo in several convoys from the port of Coquimbo to the summit.. As with other large LSST cargo items, like the Coating Chamber and the Primary/Tertiary Mirror (M1M3), LSST worked with local officials to identify and remove obstacles along the route, and local police provided escorts for the convoys with oversized cargo.

Despite the fact that LSST has completed similar oversized cargo transports in the last year, Jacques Sebag, Telescope and Site AIV Manager for LSST, commented, “In a way, this was the most complicated transport we’ve done because of the number of pieces—including large ones—and the time available.” After its arrival in port, the team only had about a week to move all 26 pieces of the TMA to the summit before the start of a Chilean national holiday period, during which large transport vehicles are not permitted to circulate.

On the night of Friday, September 13, the top end assembly of the TMA was transported through the Puclaro tunnel, the narrowest point on the route, located a short distance from the base of the mountain. Two sections of the top end had been removed to ensure the cargo would fit through. Once out of the tunnel, the LSST and Javier Cortes teams took a moment to celebrate the fact that all the oversized pieces of the telescope have now been transported safely through town, and through this tunnel! Jacques Sebag remarks that “the success of this operation is possible because of the support and cooperation of the many people involved, and we are grateful.”

Now that the wrapped pieces of the TMA are all safely on the summit, prep work for reassembly of the TMA on the telescope pier is currently underway—this includes preparation of the pier and scheduling of the cranes that will move the heavy equipment into place. Reassembly of the TMA by personnel from GHESA and Asturfeito is scheduled to begin after this work is complete, and will also be influenced by other activities happening simultaneously, such as ongoing work on the LSST Dome.