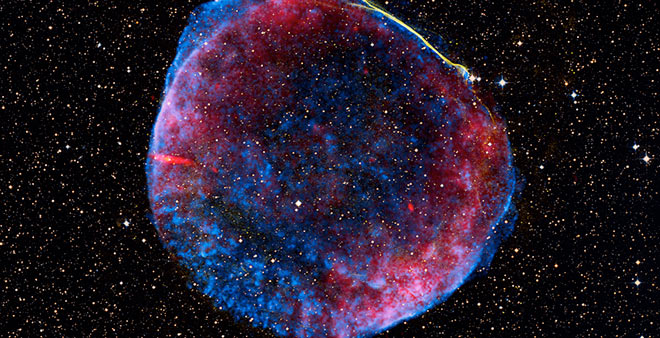 Supernovae are stellar explosions so energetic they can briefly outshine an entire galaxy, radiating as much energy in a short amount of time as an ordinary star like the Sun is expected to emit over its 10 billion-year life span.

Supernovae are dynamic events that occur on time scales of hours to months. They can be triggered in one of two ways: by the sudden re-ignition of nuclear fusion in an extremely compact star, or by the gravitational collapse of the core of a massive star. In the first case, a compact white dwarf star may pull enough extra material from a close companion to raise the temperature and pressure at its core. This causes the carbon in the core to "ignite" and it undergoes runaway nuclear fusion, completely disrupting the star. In the second case, the core of a massive star may undergo sudden gravitational collapse, causing the layers of gas surrounding it to drop, then rebound with extreme force in a supernova explosion.

Thousands of supernovae have been discovered in the history of astronomy, and we can use these massive explosions to probe billions of years into the past. For example, a type of supernova called SN 1a was instrumental in demonstrating the existence of mysterious force called dark energy.

Rubin Observatory is forecast to discover three to four million more supernovae during its ten-year survey, spanning a very broad range of distances. This overwhelming compendium of stellar explosions will enable us to take a dramatic step forward in supernova studies and allow for novel techniques and insights to be brought to bear on such diverse fields as the study of large-scale structure in the Universe, the explosion physics of supernovae of all types, and star formation and evolution.

From studying nearby giants that will someday undergo such a violent death, to studying how the material flung out into the cosmos by early massive stellar explosions becomes incorporated into the next generations of stars, to probing properties of host galaxies and clusters and determining the arrangement of the galaxies themselves, with supernovae we can probe the scales of the Universe from even shorter than a single astronomical unit (Earth-Sun distance) to the entire expanse of the observable universe.