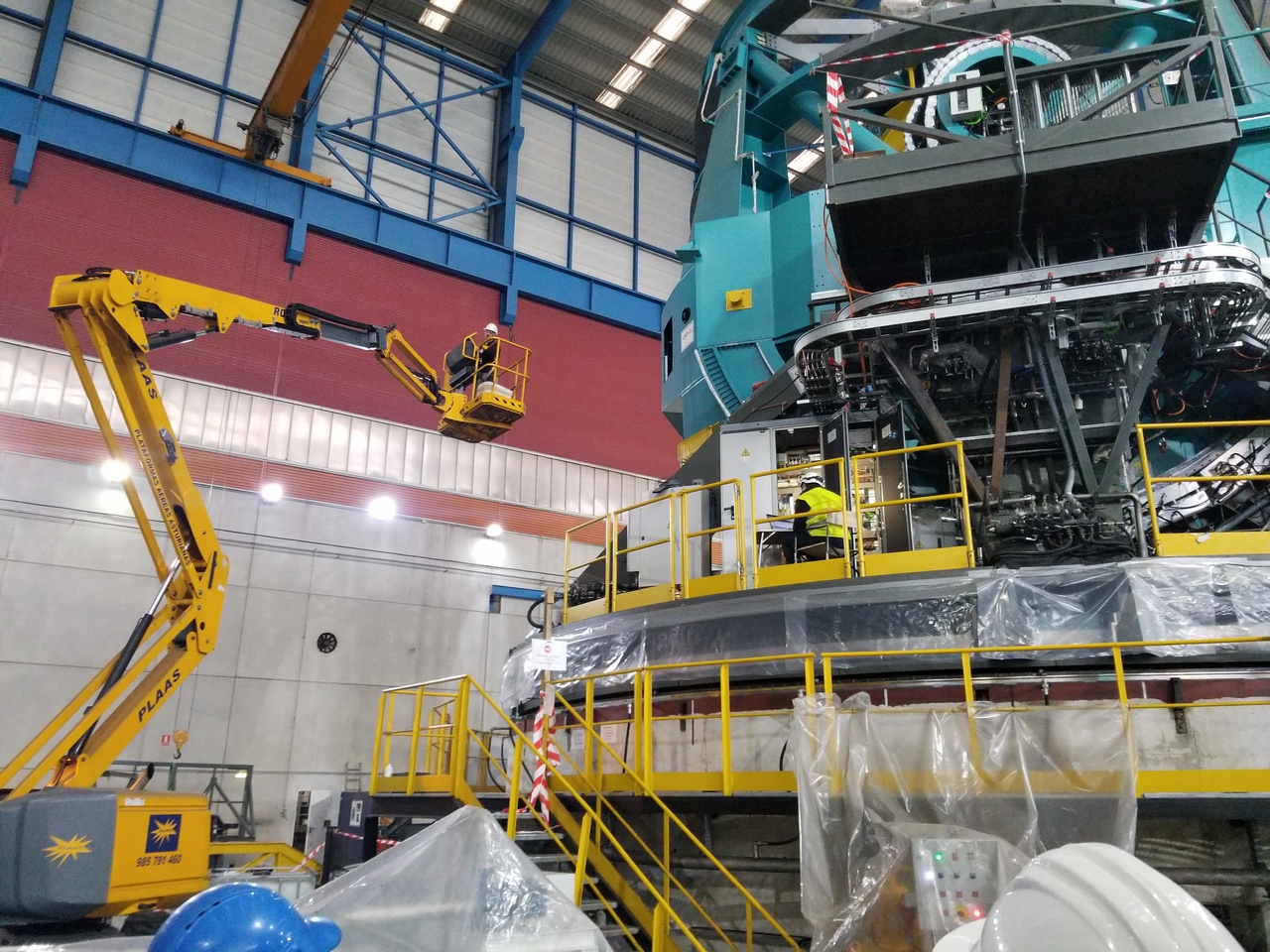 May 4, 2018 - An LSST team spent 5 days in Spain last month conducting a thorough safety review of the Telescope Mount Assembly (TMA) at the facility of vendor Asturfeito. LSST Safety Manager Chuck Gessner, Telescope and Site Technical Manager Shawn Callahan, Senior Systems Engineer Austin Roberts, and Lead Electrical Engineer Oliver Wiecha inspected the numerous safety features included in the TMA, and reviewed the procedures by which the group of vendors responsible for building the TMA (referred to as UTE) will verify that the hazard mitigations meet LSST requirements. The team determined that although there are still actions that must be completed by the vendors before the TMA ships to Chile (currently scheduled for November 2018), everything is on track to be finished in time. At the conclusion of the review, Asturfeito and designer Empresarios Agrupados (EA) were given approval to begin Factory Acceptance Testing for the TMA.

“Back in the early design days,” says Chuck Gessner, “we used Military Standard 882 and our own personal experience working on large telescopes to help us identify and document potential hazards.” The process became an official LSST policy (LSST Hazard Analysis, or LPM-49) and was included in the design documents presented to the vendors for the TMA. The corrective measures or mitigations that were also identified to eliminate or minimize the hazards were written into the LSST/vendor contracts. Each mitigation or safety feature built into the TMA will be evaluated separately by documented test procedures during the Factory Acceptance Tests to ensure not just that it has been built, but also that it functions as intended to prevent accidents or injuries before shipment to Chile. The recent review was significant because it marked the first time many of these longstanding design elements could be inspected as physical parts of the telescope.

The TMA presents numerous safety challenges for individuals working on and around it, many of them related to the massive size of the structure. The elevation drive, for example, which will eventually move on a pre-programmed cadence, weighs approximately 151 tons. It’s critical from a safety perspective that this structure can be locked in place when people are working around the telescope. Therefore, it has giant dedicated stay-pins that can be set in place to prevent unexpected movement of the drive.

In Chile, workers will regularly need to access parts of the telescope that are far off the ground, so the TMA also includes features that allow them to do this safely. A versatile articulating boom lift (shown in the photo above) can be maneuvered into position to allow an individual to access the center section of the telescope while safely harnessed to the secure lift basket. Additionally, although not yet installed, a set of deployable platforms will be situated on top of the fixed platforms on the side of the TMA structure. These platforms can be moved towards the camera, providing stable structures for workers (who will also be wearing fall protection gear) to stand on while accessing the camera to change filters or perform maintenance on it.

The silent azimuth and elevation linear drives will operate using magnet assemblies (shown in the photo on the left below) that have been installed on the drive arcs, and the DC power to run the motors will be supplied by large capacitor banks. Mitigations related to the hazards of these capacitor banks were also inspected during the safety review; for example, the capacitor cabinets (the orange boxes in the photo below) are designed with an interlock that prevents the doors from being opened when the voltage inside the cabinets is unsafe.

These are just a few of the 149 mitigations or precautions LSST and designer EA have taken to make sure people are safe working on and around the TMA. During the Factory Acceptance Testing in the coming months all of the mitigations will be tested and verified. And in Chile, where the TMA will arrive late this year, the team of LSST safety personnel and engineers is growing as integration activities increase. Read more about LSST’s commitment to safety here, and view more photos from the recent TMA visit in the LSST Gallery. 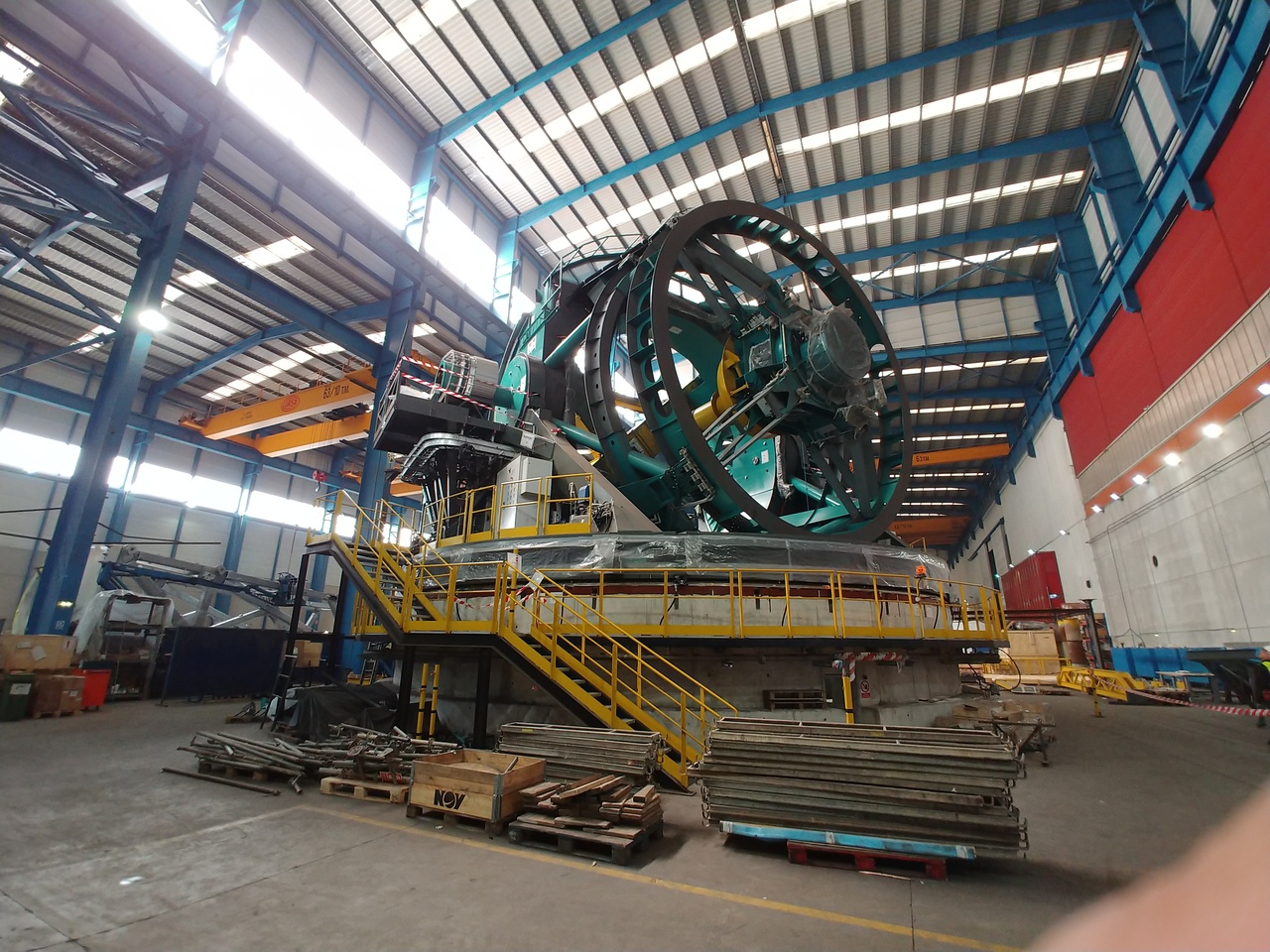