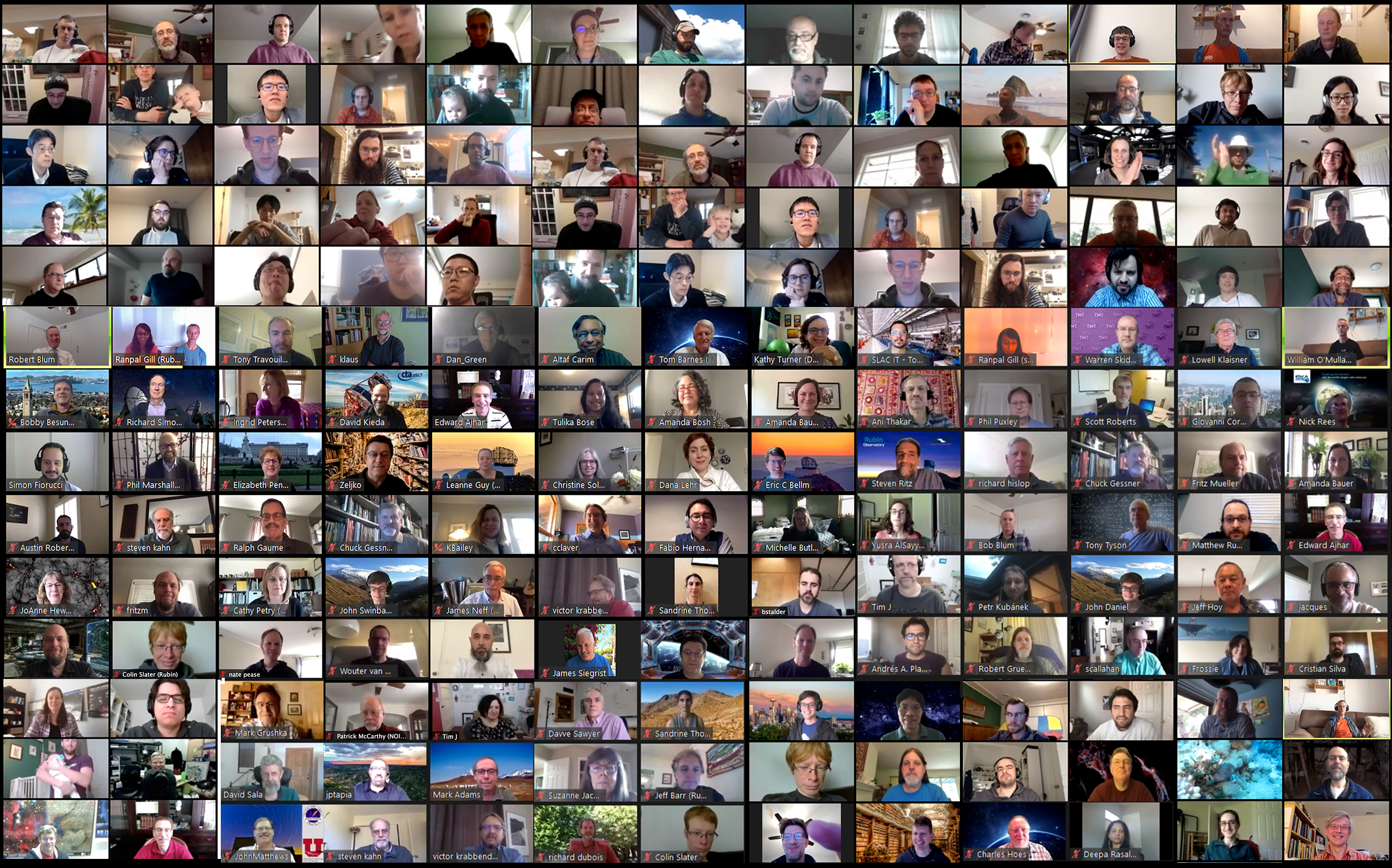 August 16, 2021 - The 2021 Rubin Observatory Project and Community Workshop (Rubin 2021) was held virtually from August 9-13. Although the project office had hoped to host this year’s meeting in person, the continuing COVID-19 pandemic drove the meeting online for another year. On the bright side, the virtual format contributed to a new record for registration—more than 820 people signed up to participate! In addition to multiple daily Zoom presentations, the meeting featured a dedicated Slack workspace for session-specific questions and discussions. Most of the virtual sessions at Rubin 2021 were recorded and are available for viewing on YouTube.

The week started with an overview plenary session that included Rubin Observatory Construction status reports from Project Director Steve Kahn and Project Manager Victor Krabbendam. Updates to the Project schedule, based on recent re-baselining activities related to the COVID-19 pandemic, were also presented. After that, parallel breakout sessions covered a variety of technical and science topics, and a session titled, “Building Inclusive Practices at Your Home Institution” offered a forum for discussion and reflection on Diversity, Equity, and Inclusion.

Tuesday’s program began with Lightning Stories, five-minute recorded talks in which Rubin Observatory staff members shared details about their roles on the Rubin team. Angelo Fausti, Sandra Romero, Richard Dubois, and Margaux Lopez were featured in this round of talks. The plenary presentation that followed was given by Bob Blum, Interim Deputy Director of Operations, who shared updates and opportunities related to Rubin Operations.

Tuesday also featured a full schedule of breakout topics, including Rubin Research Bytes (RRB), which are flash talks on Rubin-related scientific research, engineering, or software. These were introduced at last year’s virtual meeting and proved to be a valuable substitute for in-person poster presentations. This year, 37 (RRB) talks were included in eight concurrent sessions.

Wednesday began with four more Lightning Stories, presented by Blake Mason, Te-Wei Tsai, Carola Gonzales, and Jeff Tice. Next, Federica Bianco, LSST Science Collaborations Coordinator, gave a report from the Science Collaborations (SCs) and introduced the eight SC chairs, each of whom gave a short presentation on their collaboration’s opportunities and activities.

Wednesday’s breakout topics included the LSST Survey Strategy,  Satellite Constellations, Citizen Science, Cybersecurity, and a DEI workshop on Bystander Intervention. A new addition at Rubin 2021 was a dedicated set of sessions on Tuesday, Wednesday, and Thursday, presented in Spanish by members of Rubin’s Chilean team, that addressed a range of technical subjects.

This year’s keynote science talk, titled, “Science with the Dark Energy Survey,” was given by Dr. Chihway Chang and Dr. Elisabeth Krause at Thursday morning’s plenary. The well-attended talk featured an overview of the experiment and collaboration, and described the breadth of analyses enabled by the DES data set, ranging from solar system science, characterization of milky way satellites, to galaxy evolution and cosmological constraints.

Thursday also featured the first half of an interactive workshop on the topic of systemic racism, facilitated by The BIPOC Project; the organizers hope to offer more workshops like this in the future. Other parallel sessions on Thursday addressed topics including Active Optics, the DM Science Pipelines, Education and Public Outreach (EPO), External Synergies, Independent Data Access Centers (IDACs) and Engaging with Rubin Observatory.

On Friday, the anti-racism workshop concluded while other attendees explored Photo-z and Crowded Stellar Fields or interacted with the Rubin Science Platform developers in breakout sessions. The meeting then wrapped up with a presentation in which the Session Chairs gave a short summary of each breakout session.

It was a busy and productive week, but who wants a meeting that’s all work and no play? Some informal features that were popular at last year’s meeting returned, including a virtual board game session on Wednesday, and a coffee break Slack channel for meeting and chatting between sessions. A new social opportunity was also introduced this year: a social media and Slack campaign that introduced daily themed prompts for people to respond and contribute to.

The hard-working Program Organizing Committee, led by Ranpal Gill, and the Scientific Organizing Committee, led by Melissa Graham, contributed to the success of the second virtual Rubin PCW. After so much time working remotely or in small groups, we’re looking forward to being able to gather with our colleagues in person again. Will it be next year? Let’s hope so! Rubin 2022 is tentatively scheduled for August 8-12 in Tucson, Arizona.