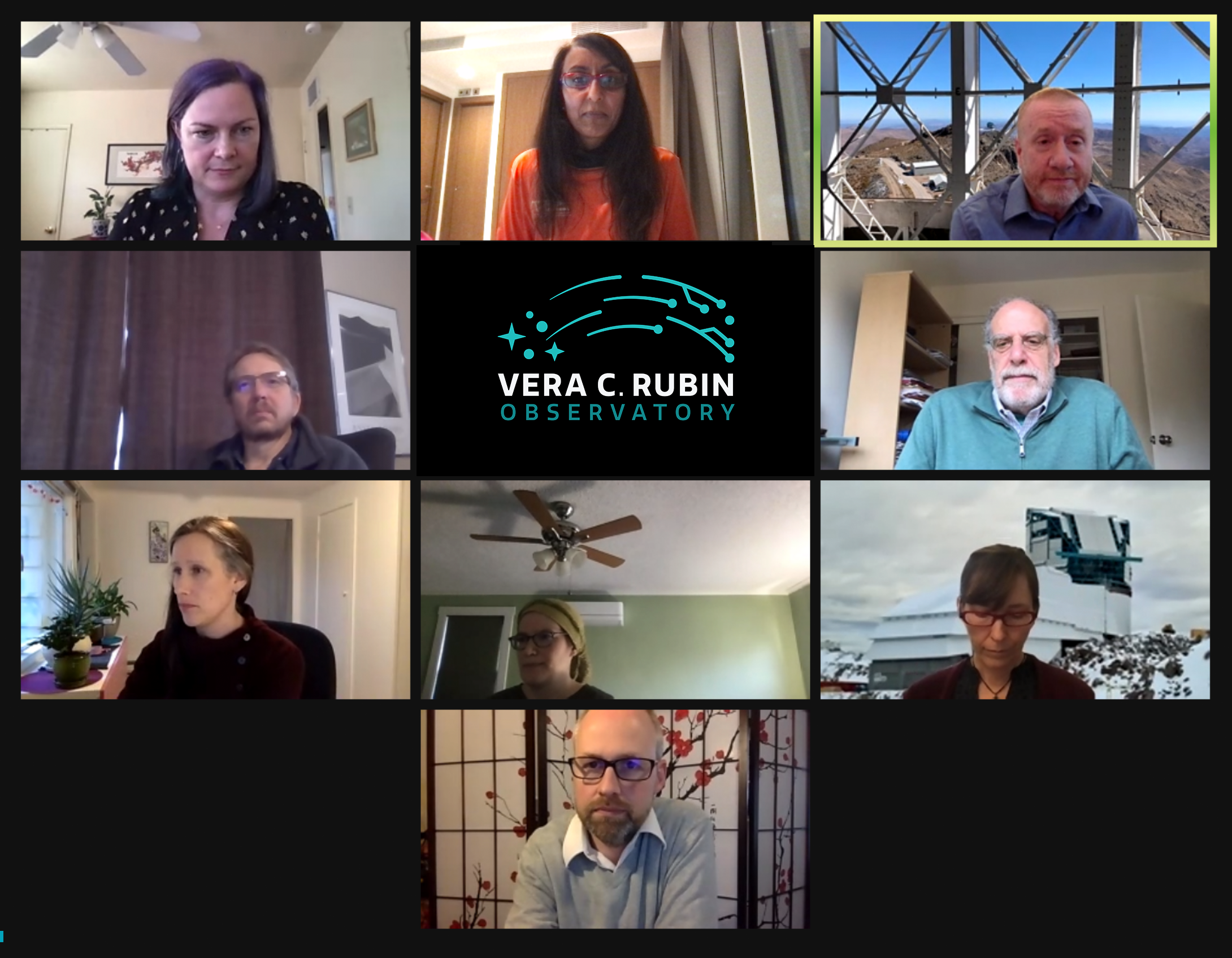 January 25, 2021 - This year's AAS Winter Meeting (AAS 237), originally planned for Scottsdale, AZ, was held virtually on January 10-15th, 2021. As in past years, Rubin Observatory had a prominent presence at the meeting—although without a conference center, an exhibit hall, or chance encounters over coffee, things definitely felt different. Nevertheless, members of the Rubin team made productive use of the online meeting, hosting a virtual exhibit booth, an Open House, and several breakout sessions throughout the week.

More than 70 people attended the Rubin Observatory Open House on January 12th, which featured presentations from members of the Rubin Observatory and the Rubin science community. Director Steve Kahn provided a high-level summary of the Construction project, including the impact of the  Covid-19 pandemic on the schedule. Project Manager Victor Krabbendam commented on overall technical progress, as well as advances made in each of the construction subsystems. Bob Blum, Acting Director of Rubin Operations, gave an overview of Operations plans and introduced the other members of the Operations Leadership team. Melissa Graham, head of the Community Engagement Team (CET), described plans for Data Preview 0 (zero) and opportunities for community involvement. Interim Deputy Director Amanda Bauer gave updates on the Legacy Survey of Space and Time (LSST) Cadence activities, and Phil Marshall, Deputy Director for SLAC, explained the in-kind contribution program. In her role as LSST Science Collaborations Coordinator, Federica Bianco described the mission and makeup of the eight LSST Science Collaborations, and encouraged participation from anyone wanting to do science with Rubin. Finally, Jeno Sokolowski, LSST Corporation (LSSTC) Director for Science presented on the role of the LSSTC, and the programs and activities it supports in order to maximize Rubin Observatory science. A full recording of the Open House can be found at this link.

Rubin Observatory's virtual AAS exhibit booth featured a live chat room and an option to join a Zoom conversation with Rubin staff. Attendees who visited the booth could also access a suite of informational documents and videos. The Rubin Communications team facilitated a contest to increase booth traffic; participants took a short quiz and a winner was selected at random from the entries each day. The six daily winners will be among the first people to sport Rubin Observatory T-shirts that feature our new logo.

Melissa Graham represented the CET at the exhibit booth, hosting two information sessions on January 13th and 14th for scientists interested in learning more about participating in Data Preview 0. Current information on community participation in DP0 can be found at this link.

On January 14th, the LSST Dark Energy Science Collaboration (DESC) hosted a session in which it announced the public release of a set of data products developed in DESC's Second Data Challenge (DC2). DC2 is a simulated sky survey, covering 300 square degrees in six optical passbands following the first five years of a reference LSST observing cadence. The simulated data in DC2 will be used in Data Preview 0.

Thanks to the many project members who represented Rubin Observatory at this year's meeting, as well as those who helped staff the exhibit booth, answering questions and engaging with meeting attendees during the week. We hope to be able to network and collaborate with our colleagues in person again soon.