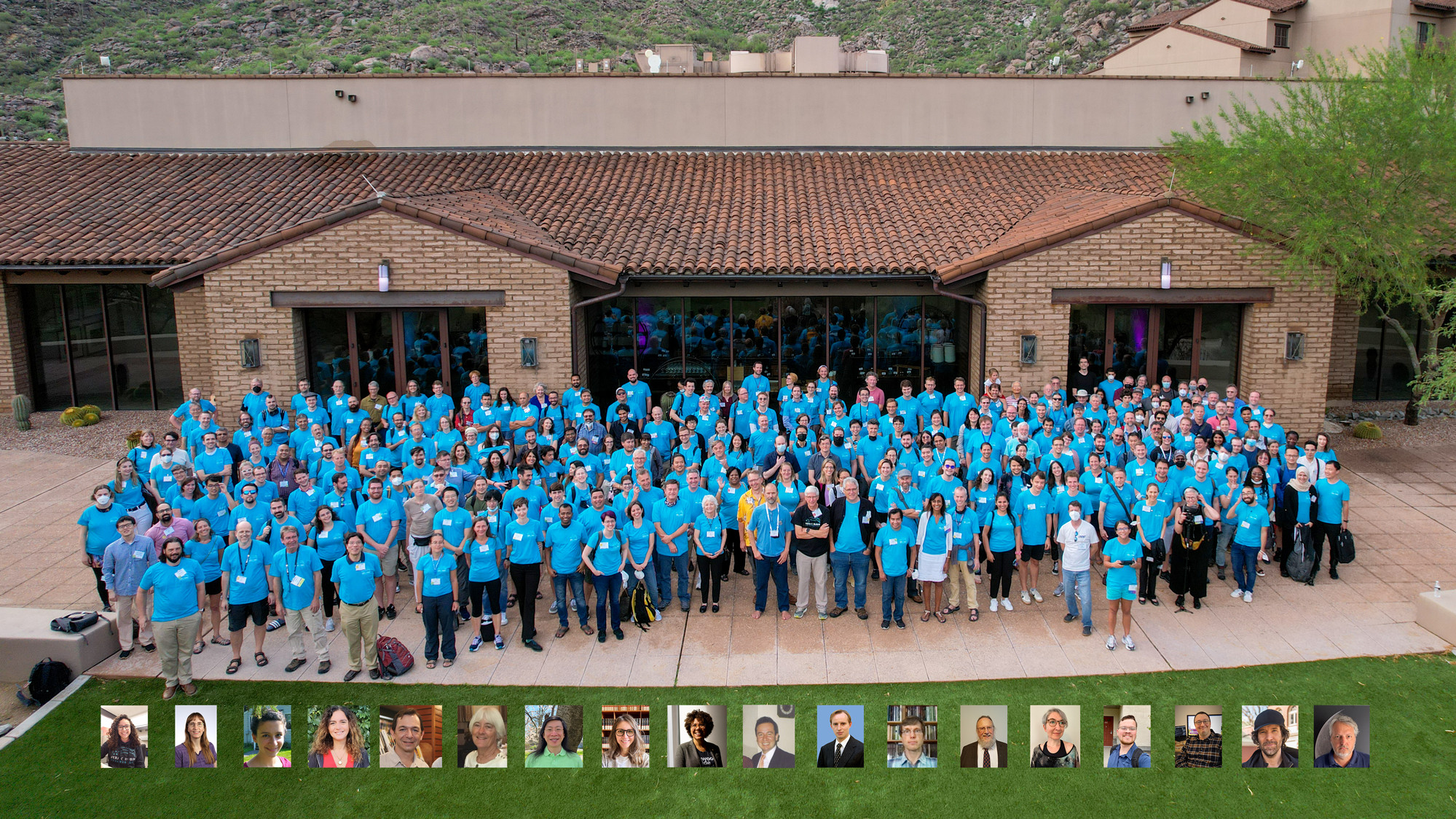 After two years of all-virtual meetings, the Rubin Project and Community Workshop (PCW) returned as a physical event in 2022! More than 300 people attended the meeting at the Ritz Carlton Dove Mountain resort in Tucson, Arizona, and an additional 241 people registered to participate virtually in plenaries and select breakout sessions. A robust COVID safety protocol was established in advance to make the meeting as safe as possible.

The location for this year’s PCW was significant. Way back in 2010, Rubin Observatory (then named LSST) was selected as the top priority for the next decade of ground-based astronomy in the 2010 Astronomy and Astrophysics Decadal Survey. The annual meeting that year was held at the Ritz-Carlton Dove Mountain (group photo here). In 2020, Rubin PCW organizers intended to celebrate the 10-year anniversary of the Decadal Survey announcement by returning to the same location, but the COVID-19 pandemic forced the meeting—as well as the 2021 PCW—online. So Rubin 2022 was really a dual celebration: the 12-year anniversary of the Decadal Survey announcement, and the first time since August 2019 that the larger Rubin community was able to gather for in-person collaboration, discussion, and celebratory toasts.

In addition to Rubin staff and members of the science community, a group of 34 graduate and undergraduate students attended Rubin 2022, fully supported by the LSST Corporation. During Monday’s plenary session, the undergraduate students gave short summaries of their research projects and invited attendees to a poster session after the plenary.

Tuesday’s morning plenary session featured a presentation from Bob Blum, Director of Rubin Operations. His talk was followed by “Lightning Stories” from Rubin Project members Jeff Carlin, Alexandra Goff, Alysha Shugart, and Hernan Stockebrand, who each shared details about their positions at Rubin, their professional histories, and their interests outside of work. The plenary was followed by a full day of breakout sessions, and posters contributed by members of the Rubin science community were on display in the foyer. A spectacular afternoon thunderstorm caused a change in venue for Tuesday’s evening reception (it was moved indoors), but it cooled the August day down nicely.

On Wednesday, Will Clarkson, Chair of the Rubin/LSST Science Collaborations, thanked Federica Bianco, the outgoing Science Collaborations Chair, for her years of outstanding service and contributions in that role. Will also gave an overview of the Science Collaborations, and introduced the individual representatives of each Science Collaboration to give a report on recent activities and upcoming plans. The plenary session concluded with short presentations from each of the graduate students attending the PCW with LSSTC sponsorship. After the plenary ended, the students hosted a poster session to discuss their areas of study with PCW attendees. More breakout sessions filled out the Wednesday agenda, and the day wrapped up with ten parallel “Unconference” sessions that participants had proposed and voted on throughout the day.

Thursday morning began with the Keynote Plenary Session. Dr. Lauren Corlies, Head of Education and Public Outreach (EPO), introduced the suite of online, interactive products—including a game called Rubin Space Surveyors—that the EPO team is preparing to launch publicly when EPO moves into Operations in October 2022. For the second half of the plenary, Prof. Marcia Rieke gave a talk titled, “JWST & Rubin Observatory: Engineering, Commissioning, and Science,” about how Rubin and JSWT can complement each other to produce great science. Breakout sessions rounded out the last full day of the PCW, with another set of contributed posters displayed outside the breakout rooms.

A final set of breakout sessions kicked off the last day of the conference on Friday, August 12, and Rubin 2022 concluded with a plenary session that featured short summary presentations on the dozens of parallel sessions that took place during the week.

Things were noticeably different at this year’s meeting, compared to past PCWs. The ubiquitous face masks were the most obvious change, but there were other differences: many people were more cautious about being in crowded spaces, and social interactions just seemed to take a little more conscious effort than they used to. Providing a valuable experience for a much larger group of virtual participants than in the past  was also a challenge this year—the daily plenaries saw nearly 100 virtual participants—and session chairs made an effort  to provide virtual access to sessions, even in rooms that weren’t set up to support it. Overall, the Rubin community spirit of collaboration and camaraderie was especially evident throughout the week.

Congratulations to the organizers of Rubin 2022—it was a truly historic meeting!