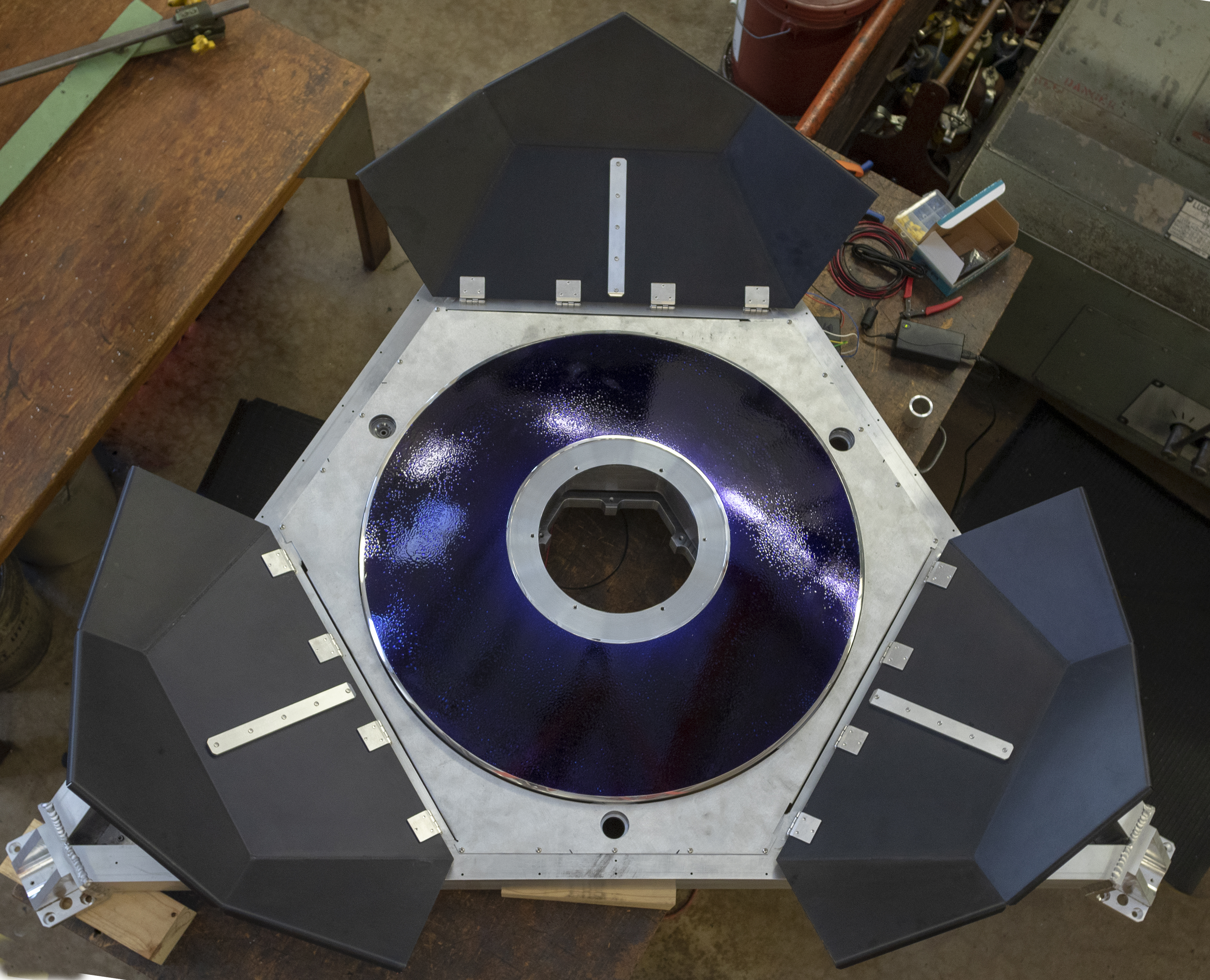 March 5, 2019 - The object in this photo, called the calibration screen reflector, was manufactured in the National Optical Astronomy Observatory (NOAO) instrument shop, which is located in the same building as the LSST Project Office in Tucson, Arizona. Our talented instrumentation team has been working on this piece of equipment for many months, and it shows! The reflector will be an important component of the calibration system inside the dome of LSST; this system is designed to determine how real-world factors like dust, and evolution to the sensitivity of the equipment over time, affect the images taken by the LSST Camera.

The reflector will be used to uniformly illuminate a large flat-field screen (referred to as the calibration screen) inside the LSST dome. The reflector will be mounted on the top end of the telescope, and when the telescope is pointed at the screen, light will reflect off this mirror and onto the screen. Illuminating the calibration screen with different wavelengths of light enables the characterization of various aspects of the telescope response. For example, at the beginning of each observing night we'll take flat field images, using bright LEDs, that will be used to track and correct for the effects of dust on the optical elements. In this process, called flat-fielding, the calibration screen is evenly illuminated and images are captured, allowing the measurement of effects such as pixel-to-pixel sensitivity variation over the detector. Once the measured deviations from a flat field have been mapped, they can be compensated in software from all images taken that night with the LSST camera as part of the data pipeline processing.

At less frequent intervals (approximately four times per year), a tunable laser will be used to scan entire filter bandpasses in 1-nanometer increments. This will help determine and monitor effects such as evolution in filter bandpasses, and the fine wavelength response function of the telescope and detectors.

Machining and polishing of the reflector was completed by the instrumentation team late in 2018; the mechanical components, including the protective retractable cover, were more recently added. In order to protect the reflector from scratches or fingerprints during the remainder of the work, it was coated with a layer of opticoat, the same polyurethane substance that is currently protecting LSST’s Primary/Tertiary Mirror (M1M3). The calibration screen reflector assembly will shortly be sent to a Tucson-based vendor to be painted and anodized, which will eliminate the reflective properties of all the pieces surrounding the reflector itself. Then it will return to the LSST Project Office building to be reassembled and tested before shipping to Chile.

Ron Harris, along with Senior Instrument Maker Anthony Borstad and Machinist Apprentice Tony Tache, began working on the calibration screen reflector in June, 2018. Along the way, they received significant assistance from LSST Senior Mechanical Engineer Gary Muller, LSST Telescope & Site Calibration Systems Engineer Patrick Ingraham, LSST Mechanical Designer Brian Johnson, and NOAO Optics and Coatings Lab Supervisor Gary Poczulp. Now that the reflector is mechanically complete, the instrumentation team will shift their focus to the support structure and optical table for the LSST Commissioning Camera, and the LSST Secondary Mirror (M2) light baffle. Because so many components of LSST require custom machining, there are no dull moments for this group!