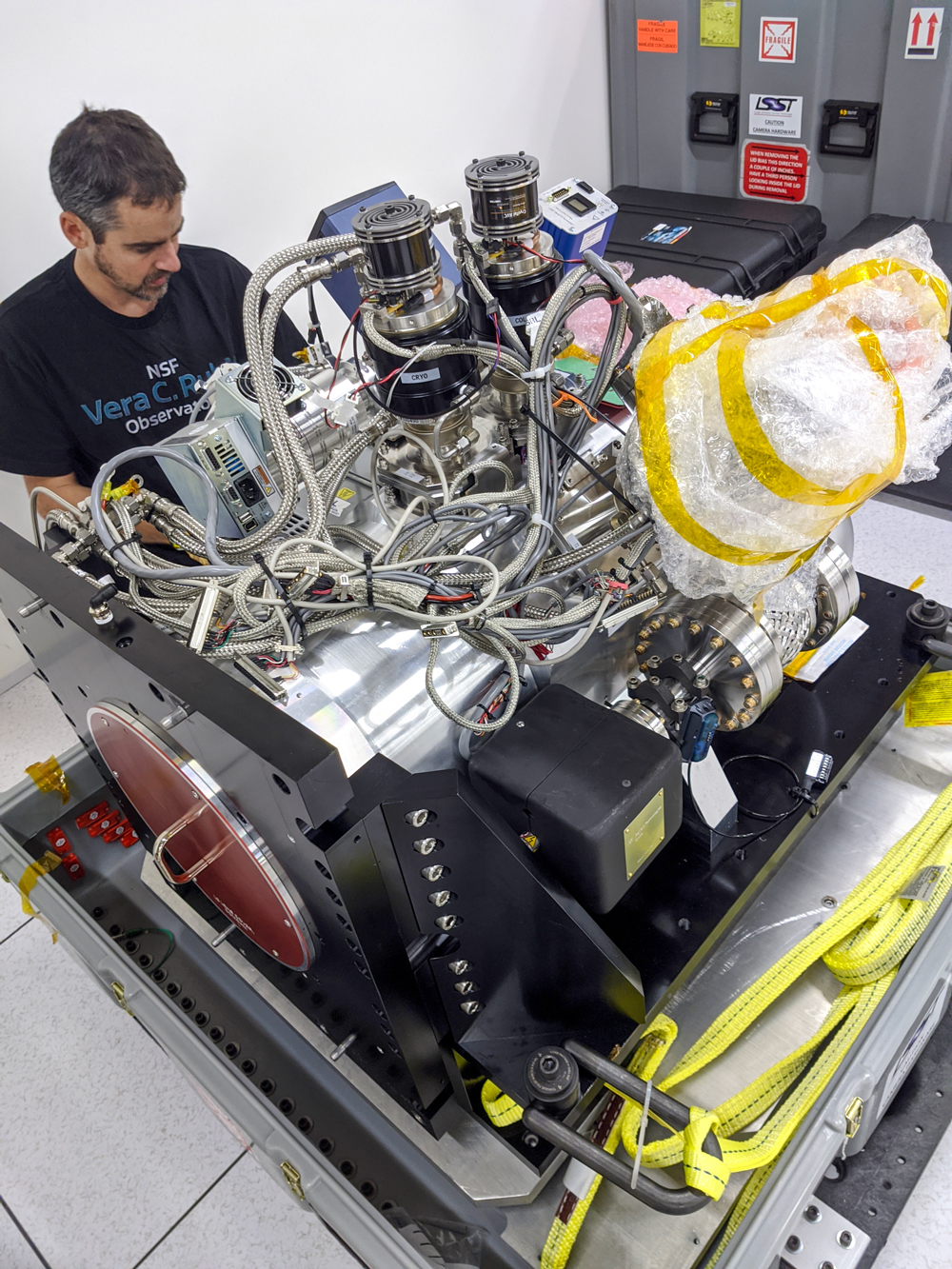 May 5, 2020 - The Rubin Observatory Commissioning Camera (ComCam) shipped from Tucson, AZ, on March 16th and arrived safely in Chile in early April. Because of the summit construction shutdown (due to safety concerns about the COVID-19 pandemic), the ComCam team set up an instrument lab at the AURA Base Facility in La Serena in order to confirm that ComCam had arrived undamaged. There was some extra space in the Base Facility Data Center server room for the temporary lab—this solution ensured plenty of isolated space for working, but also made network connectivity to the ComCam and other observatory servers relatively straightforward.

ComCam traveled to Chile in five groups of crates and containers. Four of the shipments were diverted to La Serena (computer servers, cryostat, quadbox, and filter changer). The fifth shipment of the ComCam integration structure, which will allow ComCam to be mechanically integrated with the telescope and used for testing on Cerro Pachón, wasn’t needed in La Serena and was delivered straight to the summit as originally planned. Some necessary equipment, tools, solvents, and nitrogen bottles were also brought down from the summit to the Base Facility so that ComCam could be brought back to life safely. After placing the servers into racks and configuring them for the Chile networks, the team checked the ComCam on-board computers in the quadbox while it was still in its shipping crate. Then they lifted the quadbox onto its testing cradle, which allowed connection to the cryostat and the start of power-up tests. A few days later the team successfully took bias and dark images, followed by pinhole and flatfield images.

Now the camera is confirmed as operating normally, as it was in Tucson, and the team is waiting for the summit site to re-open (when COVID-19 restrictions are lifted and Project leadership feels it is safe). But there’s work to do in the meantime, including activities to make further progress on software development, and integrating Comcam with other infrastructure in Chile. In particular, this includes the newly built Commissioning Cluster, a major delivery milestone for the Data Management team, which will serve as the major local control and data analysis platform in Chile from now through the final phases of Rubin Observatory Commissioning and into early Operations.

When the Cerro Pachón construction site re-opens, ComCam will be carefully repacked and transported to the summit facility building. Once unpacked there, it will undergo another health check to make sure it’s functioning properly. Then the quadbox will be integrated with the refrigeration pathfinder, and the cryostat, quadbox, and refrigeration pathfinder assembled onto the ComCam integration structure. Following that, the whole structure will be mounted on the rotator on the camera cart. All this work will take a few months, but at its conclusion, ComCam will be ready for integration with the Telescope Mount Assembly (TMA).

Photos of ComCam and the integration structure arriving in Chile, and ComCam activities in La Serena, are available in the Gallery.