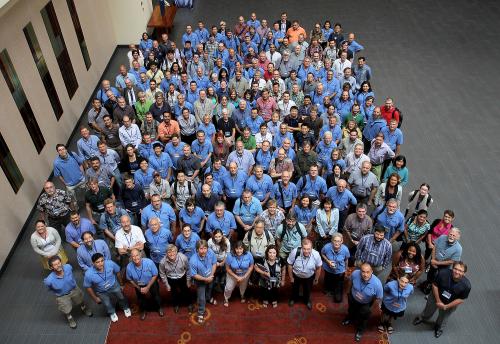 The LSST2014 Project and Community Workshop, held August 11-15 at the Hyatt Regency in downtown Phoenix, allowed LSST’s distributed technical teams to interact with each other and the broader science community. Sessions covered topics of cross-cutting significance and interest. Also for the first time, the Project shared the week with a concurrent science workshop – the LSST Observing Cadence Workshop jointly hosted by LSST and NOAO. In addition to substantive work to facilitate the transition to construction, the workshop also afforded the many new staff members who have joined LSST in recent months the opportunity to learn the LSST “big picture.”

The LSST2015 Project and Community Workshop will be held the week of August 17 in Seattle.

More than 230 people, including project personnel, stakeholders, and members of the science community attended the five day event. While similar to the five all hands meetings (AHMs) previously hosted by the Project, LSST2014 represented a rebranding of the regularly occurring broad-audience meetings as project and community workshops with a colloquial name of LSST followed by the year of the meeting.

After the meeting, the Project conducted a survey to assess the success of various elements of the workshop. 121 of the 237 attendees took the survey. On the whole, survey participants reported a good experience comparable to previous meetings’ survey results. August continued to be the most popular month for holding the workshop with 52% of respondents selecting it as their preference for the next meeting.

As with previous meetings, fullness of the schedule was the primary cause for respondent dissatisfaction. The addition of the concurrent science meeting contributed to an increase, compared to previous surveys, in the number of respondents who rated the amount of breakout sessions as excessive. Because the Project both appreciates the concerns about schedule fullness and recognizes the logistical value of coupling the project and community workshop with a science workshop, the practice likely will continue for future meetings but with an adjustment in approach, perhaps having consecutive rather than concurrent workshops.

While the Project’s most recent previous broad-audience meetings have been held in Tucson, Arizona, downtown Phoenix was chosen as the LSST2014 locale in an attempt to accommodate previous requests for a venue nearer to a major airport and with more dining and entertainment options outside of the workshop hotel. Attendees appreciated the ease of getting to the venue but were less enthusiastic about the urban setting. In particular, many lamented the lack of green space.

Holding the meeting in Phoenix also was intended as a half-way measure toward potentially rotating the workshop’s venue among LSST partners’ home locations, as has been frequently suggested. As a test of the organizing committee’s ability to logistically support a workshop hosted at a location remote from LSST headquarters, LSST2014 was successful enough to convince the Project to announce Seattle as the location for LSST2015.

For more information about LSST2014, including the workshop’s presentations and a full report on the post-meeting survey results, visit https://project.lsst.org/meetings/lsst2014.

Article written by:
Robert McKercher
Most of the LSST2014 workshop’s 237 attendees pose for a group photo in the Hyatt Regency Phoenix Atrium.
Image Credit:
LSST