Rubin Observatory will bring “close-to-home” objects into focus as no other telescope has. Whether searching for asteroids that might one day collide with the Earth, or finding new information about planet formation and evolution, Rubin Observatory will provide users with unparalleled access to the millions of small objects that lie within our own Solar System—remnants of the primordial solar nebula that allow us to decipher its early history. 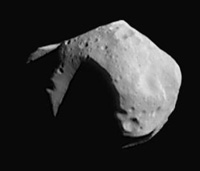 Image of asteroid 253 Mathilde taken by the NEAR spacecraft from a distance of 1,500 miles (2,400 kilometers). The part of the asteroid shown is about 36 by 29 miles (59 by 47 kilometers) across. Mathilde's angular shape is believed to result from a history of violent impacts.

Cosmic impact has the potential to eliminate humankind as we know it. Therefore, it is critical for us to systematically assess the magnitude of this threat. The atmospheric, geological, and biological effects of cosmic impact have become apparent only since the early 1980s, when the Cretaceous-Tertiary extinction was first linked to the impact of a 10-km asteroid. Even much smaller impactors still possess enormous energies and may cause local to regional devastation.

At Congress's direction, NASA has supported a ground-based program to identify the NEOs larger than one kilometer in diameter. The kilometer-sized impactors would be globally devastating, but much smaller projectiles would wreak unimaginable local havoc and are much more frequent. The high-altitude explosion of a body 80 meters in diameter above Tunguska, Siberia, in 1908 flattened trees over a broad area. A differently aimed impact of this scale could flatten a modern city, with deaths in the millions. Bodies larger than about 100 m in size cause ground-level explosions in the giga-ton, or billions of tons, range. Such impacts would devastate whole countries. There is about a 1% chance that such an impact will occur in the next century.

Assessment of the Potentially Hazardous Asteroid (PHA) population down to 100-meter scales, as part of an organized inventory of the small bodies of the solar system, is recognized as a high priority for NASA's Solar System Exploration program. Extrapolations from existing surveys suggest that the number of PHAs larger than 100 m is on the order of 10,000 to 20,000. These bodies are too faint to have been detected by the current surveys, and almost all remain undetected.

For each object, we need to determine the orbital elements with accuracy sufficient to predict the probability of terrestrial impact within the next 100 years. This time scale gives sufficiently early warning for the development of mitigation strategies, as needed, and is compatible with the intrinsic time scale for dynamical chaos among the PHAs. For those objects with a non-negligible impact probability, we also need physical observations to determine the size, which, when combined with a "typical" density yields an estimate of the kinetic energy of the projectile. These goals can be achieved with Rubin Observatory. 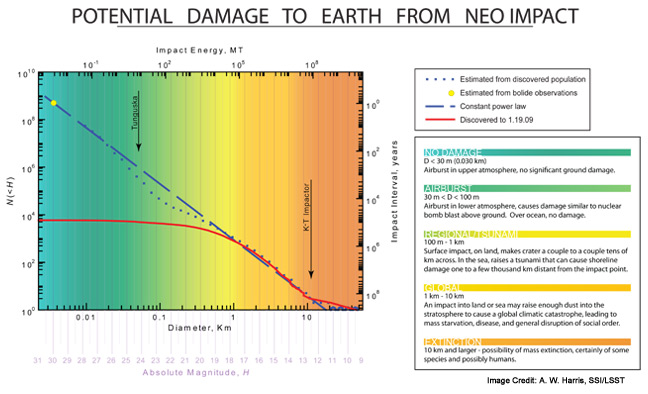 There are tens of thousands of uncharted PHAs of significant size. Their potential damage on Earth impact is shown in the chart above. The sky must be surveyed several times per month at a sensitivity 100 times that of current PHA surveys to find the PHAs down to 100 meters in size. 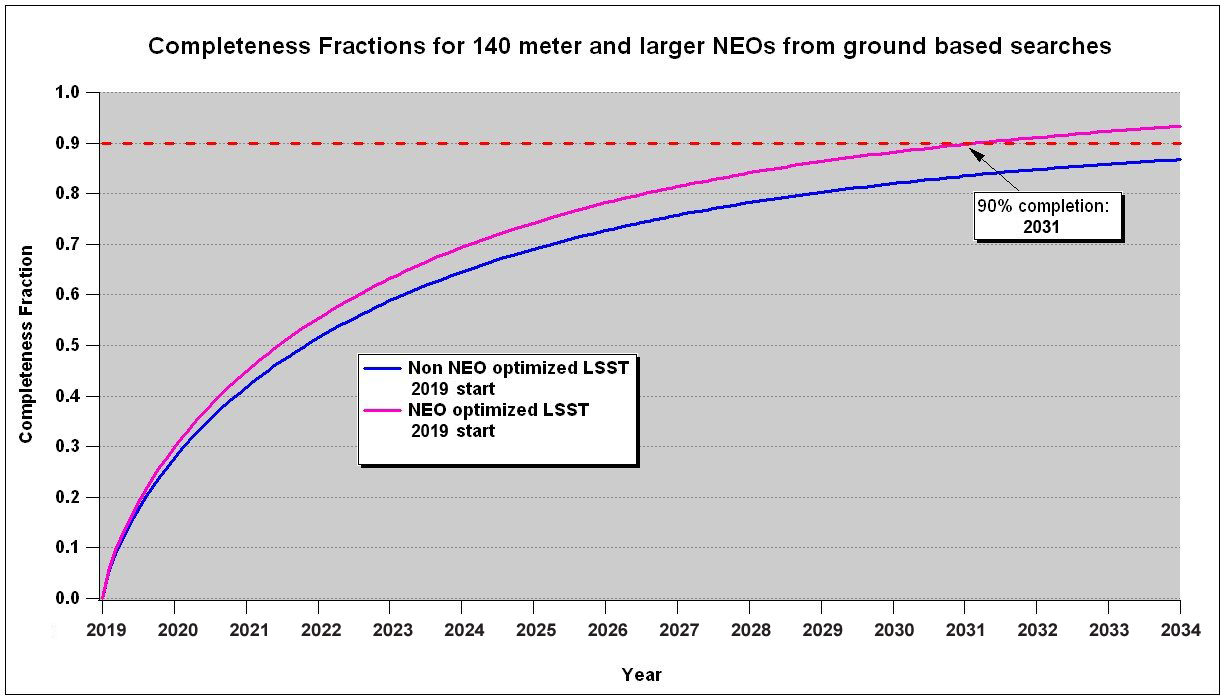 The above graph shows the completeness ratio of the LSST survey for two different survey scenarios: a survey which is optimized to look for NEOs, and a standard survey.

Rubin Observatory will be able to detect objects as faint as 24.5 in magnitude in a 30-second visit, enabling it to detect 140-meter NEOs as far away as the Main Belt asteroids. Depending on survey strategies, Rubin Observatory could detect between 60-90% of all PHAs larger than 140 meters in diameter.

Rubin Observatory will be capable of early detection as well as orbit determination. The warning time before impact depends on the asteroid's size, its orbit, and the cadence and sensitivity of the observing system. For 45m objects, the LSST warning time would be about 1-3 months, depending on their orbits. Note that the telescope would also detect such an object during three prior close approaches. As an example of a very different hazardous object—the 3 km large comet C/1996 B2 Hyakutake, which passed within 0.10 AU from Earth in 1996—Rubin Observatory could provide a warning time of 8 years, with over 500 observations over that period.