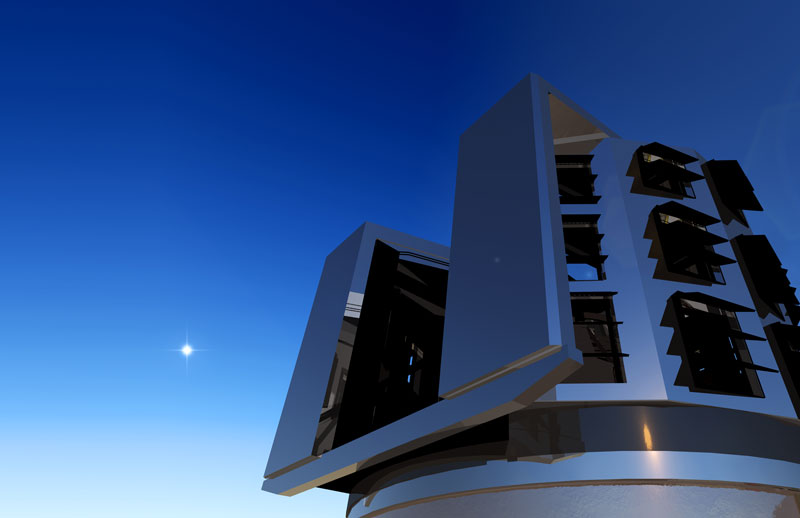 The LSST is a new kind of telescope. Currently under construction in Chile, it is being built to rapidly survey the night-time sky. Compact and nimble, the LSST will move quickly between images, yet its large mirror and large field of view—almost 10 square degrees of sky, or 40 times the size of the full moon—work together to deliver more light from faint astronomical objects than any optical telescope in the world.

From its mountaintop site in the foothills of the Andes, the LSST will take more than 800 panoramic images each night with its 3.2 billion-pixel camera, recording the entire visible sky twice each week. Each patch of sky it images will be visited 1000 times during the survey. With a light-gathering power equal to a 6.7-m diameter primary mirror, each of its 30-second observations will be able to detect objects 10 million times fainter than visible with the human eye. A powerful data system will compare new with previous images to detect changes in brightness and position of objects as big as far-distant galaxy clusters and as small as near-by asteroids.

The LSST's combination of telescope, mirror, camera, data processing, and survey will capture changes in billions of faint objects and the data it provides will be used to create an animated, three-dimensional cosmic map with unprecedented depth and detail , giving us an entirely new way to look at the Universe. This map will serve a myriad of purposes, from locating that mysterious substance called dark matter and characterizing the properties of the even more mysterious dark energy, to tracking transient objects, to studying our own Milky Way Galaxy in depth. It will even be used to detect and track potentially hazardous asteroids—asteroids that might impact the Earth and cause significant damage.

As with past technological advances that opened new windows of discovery, such a powerful system for exploring the faint and transient Universe will undoubtedly serve up surprises.

Plans for sharing the data from LSST with the public are as ambitious as the telescope itself. Anyone with a computer will be able to view the moving map of the Universe created by the LSST, including objects a hundred million times fainter than can be observed with the unaided eye. The LSST project will provide analysis tools to enable both students and the public to participate in the process of scientific discovery. We invite you to learn more about LSST science.

The LSST will be unique: no existing telescope or proposed camera could be retrofitted or re-designed to cover ten square degrees of sky with a collecting area of forty square meters. Named the highest priority for ground-based astronomy in the 2010 Decadal Survey, the LSST project formally began construction in July 2014.